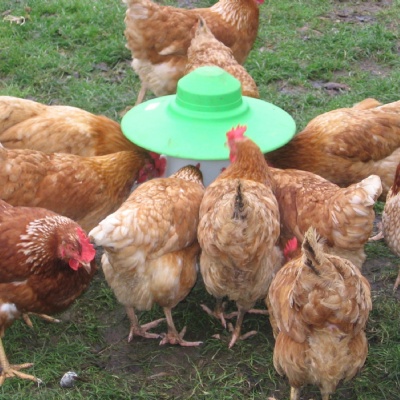 We went to Dell Farm in Whipsnade as part of our 'Buried Treasure' topic.  We found out a lot more about the Anglo-Saxons and had a cold but fun-filled and informative day alongside Year 4.

At the farm, we learned about the type of animals that the Anglo-Saxons would have kept and what they would have used them for.  The free-range chickens followed us around wherever we went - they even ran when we did!  We got to stroke one of the chickens and were amazed by how silky and soft it felt.  After we had met the animals, we solved a puzzle using Saxon runes and hunted for treasure.  We then explored the types of weapons that would have been used by the Romans, Anglo-Saxons, Vikings and Normans.  This was great fun as we were allowed to handle them.  In the afternoon, we walked to Whipsnade Common and recreated the Battle of Hastings using foam javelins and shields that we had made ourselves back in school.  Finally, to warm us up, we had some warm blackcurrant squash.